Two days before Pessach, I want to bake bread, but it will have to wait until after the holiday.

I've been making this bread for about half a year now, and even though I bake other breads regularly, this one remains a favourite. It's an adaptation from Hamelman's BREAD, but with more whole wheat in it.
The toasted sunflower seeds give it a nutty favour and the flaxseeds and sesame seeds give it a good bite. 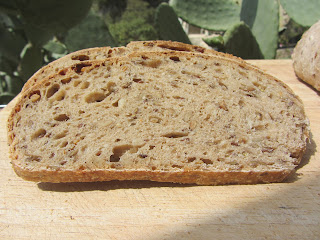 I know after a week of eating matzot, I will really enjoy a bite into this bread.

And again, we ran out of bread before I noticed. Our daily sourdough multi-grain bread takes almost two days to prepare, so I had to look for an other alternative. Luckily one of Mellow-Baker's April's recipe is a straight recipe, so that's killing two birds with one stone. 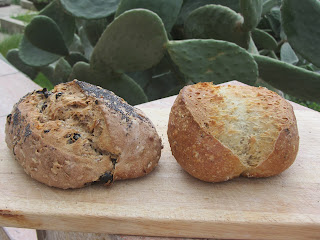 Quick White Loaf (right)
After making the first recipe from "The Art of the Handmade Bread" this one was very easy to follow. The same principle of hardly any kneeding, just letting time do the job.
The result was two very tasty, cute loaves. The crust a bit hard (left it a bit too long in the oven), but it had a nice bite to it.
Because I didn't have millet flakes, I used oats instead.
Though we don't usually eat white bread, it was a nice variation to the daily bread.

I also made two loaves of the Cherry, Fennel & Rye (left on the above picture), which turned out a big success. One loaf went to my parents, the other is for us to enjoy. However, I got a bit mixed up and used whole wheat flour instead of whole rye flour. I guess that what's left of Lepard's originalrecipe now is the salt and water... But this time I didn't forget the poppee seeds!

My first project on my new sewing machine was a reversable bag. 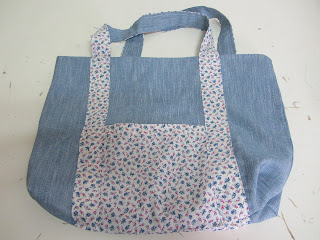 I got the instructions online (http://www.craftster.org/forum/index.php?topic=91070.0) and it was really easy just to follow along.
I made the bag for a colleague, whose birthday we celebrated a week ago. Happy birthday Chen!

Beit Zait Lake and a great loaf of bread

Today we went for a wonderful walk to the Dam just outside Jerusalem. This Dam was build in the '50's when little was known about the soil's characteristics, in order to save rainwater so much needed in Israel. After completion of the Dam it turned out that the water flows through the soil into the Wadi and the expensive engineering project turned out to be a fault. Nonetheless, after the rain season, the lake fills up with enough water for Jerusalemites to make a Saterday outing to it and picknick near the water.

And so this morning, my husband Kfir and I, as well as Kfir's sister and her fiancee took some food and water and went for a wonderful walk.
As we approached the lake, more and more cars and people came on our way, and in the end we decided to picknick in the nearby forest. For this occassion I made Lepard's Cherry, Fennel & Rye Loaf, one of this months' Mellow Baker's selection, as well as our daily multi-grain sourdough bread.

This Cherry, Fennel & Rye Loaf is the first bread I make from Lepard's "The Art of Handmade Bread". I was a bit reluctant to try his method of bread making, as the bread is made completely by hand and I so much like just to put all the ingredients into my Bosch, but it turned out it's not too much work. I used the sourdough as described by Lepard, which is still a very young sourdough and I just love the smell of it. I converted it to rye-sourdough by just feeding it rye instead of wheat flour. 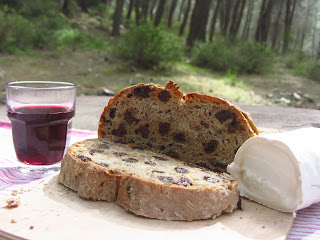 I also made several adjustments to the bread.
I didn't have Cherry's, so I used raisins. I left out the fennel since we didn't have any and also I forgot to put the poppee seeds on top.
The dough didn't rise very well and my scoring is horrible (I still haven't got the catch of it), but the taste was wonderful.
Because of the cooked rye grains it has a great bite, and the taste is just amazing.
Being used to Hamelman's recipes, I was a bit disappointed to be left with one small loaf after all that work, so I'll make sure to next time make at least double portions. Because, yes, there will be for sure a next time to this bread.

Mellow Bakers started this month, so whoever wants to join in is more than welcome! 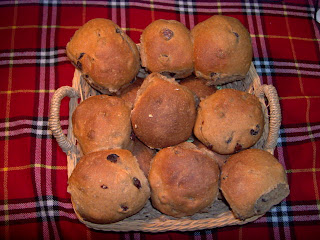 I'm finally out of bed and of course one of the first things to do after having been sick a week and a half is: bread. And since the freezer is empty, I opted for making a straight bread. In the meantime I took the sourdough out of the fridge and prepared it for tomorrow's bread.

The straight-forward bread I chose is from  Hamelman's BREAD book: Oatmeal Bread with Cinnamon and Raisins. I made a few adaptations to the original recipe. I made it 50% whole wheat instead of Hamelman's 25%. I added Hazelnuts and made rolls and one loave instead of three loaves. Also, I used sugar instead of honey.

Bread turned out nice, but I'm not overly enthusiastic about it. The dough part is too light in my opinion. Maybe next time I'll make it 75% whole-wheat.